Tours and travel in Arequipa Peru

Welcome to the white colonial city of Arequipa
The department of Arequipa is one of various terrains. It begins in the coastal desert and then climbs the Andes, reaching great altitude at the snow covered peaks and at its volcanoes.

Arequipa, known as the White City for its beautiful white walls of sillar, a volcanic stone, lies at the feet of the mighty volcanos of Mount Chachani, Mount Misti, and the snow covered peak of Mount Pichu Pichu. The downtown of the city, placed on the World Cultural Heritage list by UNESCO, features Mixed Baroque churches and mansions from the Colonial Period like the Monastery of Santa Catalina, a Spanish city in miniature with stone streets, beautiful patios, and plazas. Sabandía, Tiabaya, and Tingo, located among the large fields, are must see places, and the irresistible Arequipa cuisine is the perfect complement to the visit.

Just 3 hours and 45 minutes from the capital is the Colca River valley and canyon, one of the most extraordinary destinations in the country. Throughout the region, you can see colorful pre-Incan agricultural terraces still used today for growing quinoa, corn, barley, and wheat. During the pre-Hispanic era, the department was inhabited by the Collaguas and the Cabanas; today, the inhabitants have learned to conserve their Colonial churches in Yanque, Lari, and Madrigal, and they continue to wear their traditional clothing.

You can also do many types of adventure sports in the valley such as mountain biking, trekking, and white water rafting. And, at the Cross of the Condor, you can view the majestic flight of the condors. Other places of interest in the department are the Toro Muerto petroglyphs, the Andagua Valley of the Volcanoes, and the Cotahuasi Canyon. 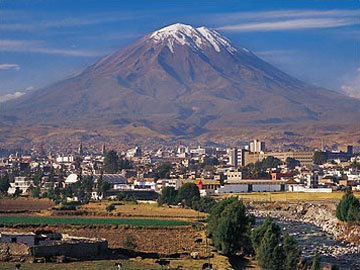 The city of Arequipa has a semi-arid and temperate climate with a maximum temperature of 21.7ºC (71ºF) and a minimum of 6.9ºC (44.4ºF). The rainy season starts in January and ends in March

DISTANCES FROM THE CITY OF AREQUIPA

Rocoto relleno: Elaborated with fragrant and tender rocotos that are cut on its top as a cover, the seeds and veins are extracted to diminish the hot flavor and they are stuffed with chopped meat, peanuts, boiled eggs, olives, cream cheese, and milk, seasoned and baked in the oven; it is served with baked potatoes 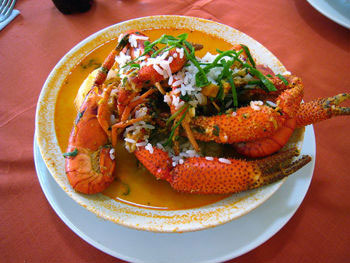